NEW: Wishlist the sequel on Steam!

Created for the GMTK Game Jam. The theme was "Out of Control". Three in a Rogue has the player control a roguelite game via Match-3 mechanics.

Three in a Rogue "2" is in development 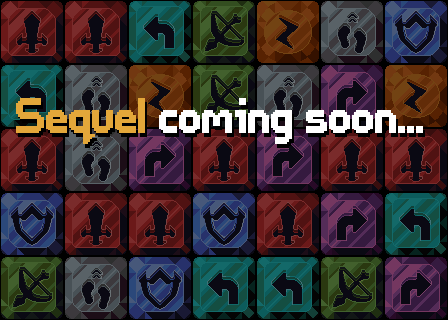 The match 3 is fun, and it's fun to plan out a turn for mintues just for it to go spiraling off the rails from you getting that melee attack you needed. Also the Main Battle Theme during the Puzzle Part is something I really wish I could listen to whenever I wanted.

You can find the full OST here: https://m.soundcloud.com/quarkimo/three-in-a-rogue-action?in=%2Fquarkimo%2Fsets%...

We just discussed your game on our podcast! Come check us out!

Hey, Potatoes Are Not Explosive here,  (although my friends just called me NotExplosive). Just listened! I'm glad you liked it, and thanks for the feedback!

Just wanted to clarify something: new gems don't spawn on the board until the start of your next turn, so all of the gems that fall down during your turn were visible to you at the start of the turn. Which is to say, any errant matches you get are actually "your fault." However it's not your fault for not realizing that , the hardest part of designing a game like this is convincing the player of what they have control over.

Also tiny gripe: I don't think you gave our composer enough credit, the soundtrack is a bit more than just bleeps and bloops, in my opinion. Granted I don't make music so maybe I'm just easy to impress.

(Now I'm gonna write a short novel about what changed since the jam build, you don't need to read this whole next part on the podcast)

Here's a summary of things that were (not) in the original jam build:

There's probably some other stuff I'm forgetting but it's easy to imagine how this leads to a much worse experience. Most players would stagger there way out of the first room (maybe hobble over to the chest to get the free potion). Then they'd stumble into the first randomly determined room. Then they'd realize they're out of movement gems so they'd wait for enemies to come to them, which they don't do because they move randomly.

If you look at our submission page you see a lot of folks saying "cool idea but it's not very fun" which is totally fair given how the game was back then. I knew there was a good game buried in here somewhere, it just took me a month to dig it up.

Anyway, thanks for playing and talking about it (one of you played for over an hour, holy crap). I tend to post new games pretty often, especially since I'm stuck at home. If you're interested earlier this year I made a relaxing game with the same composer as this one.

This was a lot of fun! I'm assuming there's no endgame, being I once turned back and found a new room in its place, so it did drag once I realized that, but it was still very fun to try and make it through as many rooms as I could. Cool stuff!

Thanks for playing. There's no endgame (yet!) But in a few weeks I'm gonna add a patch that will hopefully include a non randomized map and a boss fight.

Yo’, Templar here, I don’t know if it’s a bug or I’m doing something wrong, but clicking back to main menu in the level editor doesn’t seems to be working, the game itself is fun, but there’s no real reward for exploration, adding an incentive would really help.

To go back to the main menu you need to click the back arrow and then click the words that say "go back" ... That's not great UI huh? I'll fix that.

Thanks for the note about exploration. I'll consider that for the next patch.

The frequency of move forward blocks needs to be, like, doubled at least.  It's very easy not to die, but it's very very hard to move.

If I fix in in the post jam build will you play it again?

Glad to hear it! I ask because I've actually already fixed a lot of the stuff people have given feedback about so now I'm just waiting until I'm allowed to update it

Although love can technically be exported to android, I've never done this successfully.

np ... btw why don't the game have "Pay whatever you want option" ? 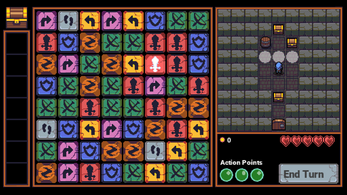 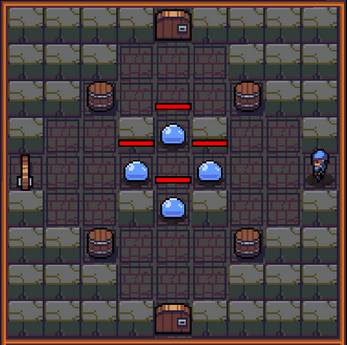