The post-jam version of this game was a result of slight modifications over the weeks that followed Global Game Jam. Including changes such as:

You can download the post-jam version of the game below for windows (.zip) and cross platform (.love).

Ship It! is a mouse-only space combat UI management sim.

You control your ship with a collection of modules, whenever your ship takes damage a module gets disabled and needs to be repaired. Both using and repairing modules costs energy, so you'll need to juggle maintenance and maneuvering while making sure you don't run out of battery.

Not what I was expecting but I liked it. The ship was fairly difficult to control but I started to get the hang of it.

Although, I was hoping there’d be more to repairing and power management. There was only a couple of times where lack of power was a problem and it was mainly when I was trying to figure out how to line up my ship with the jump gate. Nothing serious came of it so it was more or less a minor inconvenience.

Also, combat was pretty clunky, I’m just glad the enemies have no way of firing back.

Overall, it was a fun game and I could see myself going back to it and giving it another shot. If you ever feel like expanding upon it, some randomly generated “end game” content would be fun.

Thanks for playing! I don't think we'll be working on this game anymore (at least not for the time being). But I'm glad you came by to check it out! 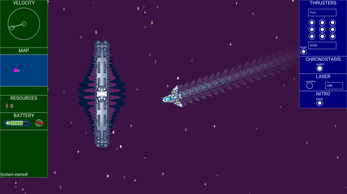